Rembrandt comes with a glossy 17-page manual which takes you step by step from loading, through simple drawing commands, to more advanced techniques by means of clear, easily understood instructions. All operations are selected from three banks of eight icons, each of whose functions are explained in the order they appear on-screen. This is fortunate, since my copy lacked the promised summary of icons in section 8 -perhaps that is going on page 18. 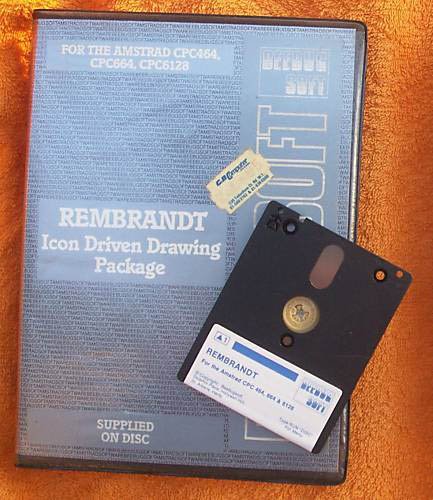 This program is usable in all three modes on the CPC 464, 664 and 6128 computers and will work with keyboard or joystick. Instructions are given for saving screens, to disc or tape and for their use in your own programs. 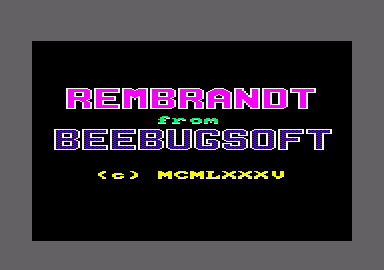 It may take two or three sessions to become familiar with all the available drawing features. Selection is made with the Esc and Tab keys, cursor movement is controlled with the arrow keys and execution with the space bar. The cross hair cursor can be speeded up by pressing Shift or slowed with Ctrl, Tab and Shift give the current coordinates.

Plotting lines, circles, rectangles, polygons and horizontal-based triangles all use the rubber-band principle, enabling accurate regulation of size and position. Single colour solid boxes and circles can be drawn, overwriting any previous work in normal Ink Mode. The AND, OR and XOR Ink Modes can be used for special effects where new lines, filled boxes and the like overwrite only parts of the existing drawing - a facility with enormous possibilities if one has time to explore it to the full.

The Fill is a joy to use. Perhaps not the fastest I've known, but efficient, and with the option to Unfill if it escapes or you just don't like the effect. The two-colour Stipple Fill gives a range of 10 possible colours in Mode 1, and if you don't like a solid edge to your stippled area, you can draw and fill in a solid colour, then over-fill with the desired stipple.

Single Pixel Plot can be achieved in either the variable width Freehand Draw or Line modes, but there is a Magnify, in which any small area (40 x 24 pixels in Mode 1) can be blown up to fill the whole screen for detailed work. I found the keys a little sluggish in this mode, sometimes failing to plot a pixel at the first attempt. Since each one must be fixed by pressing the space bar, dealing with large areas is very slow.

Also, given the choice, I would have preferred that it should increase twice the area to half the magnification, since it is easy to lose your bearings when a complex section of the drawing becomes just a mass of huge coloured squares. Still, I'm not going to knock it, since any Magnify is better than none. By plotting in the background colour, small areas can be erased within this mode, while larger areas can be removed with filled boxes. A variable-size Airbrush will spray random dots if moved around, or try staying in one position while changing colours to produce some nice little six-petalled flowers.

A useful Scroll allows the whole picture to be moved, one pixel at a time, in any direction, and selecting Grid enables cursor movement to be changed to jumps of between one and 32 pixels.
Standard Text and UDGs can be placed anywhere on the screen, but no variation of size or style of text is on offer. A Cut and Paste option enables a part of the picture to be copied or moved elsewhere on the screen, but because this is restricted to a fixed-size area similar to the Magnify box, I would find it of limited use except at an early stage in a drawing.

The program also includes a screen dump to the Amstrad DMP 1 and Epson printers, giving a fully shaded result.

A nicely presented and documented program offering a fair number of the options one might hope for in a 1986 graphic utility, but with room for improvement in the areas mentioned - Magnify, Text, Cut and Paste. It is perhaps surprising that there is no facility to design one's own graphics.

A good, reasonably priced utility suitable for most types of drawing, and the only new one designed for use in all three screen modes, it should meet the needs of most screen artists, although for very intricate detailed drawing Screen Designer still has the slight edge with its quarter screen magnify and ease of plotting. Rembrandt 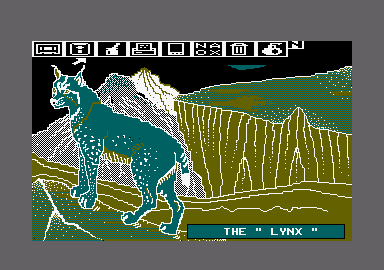