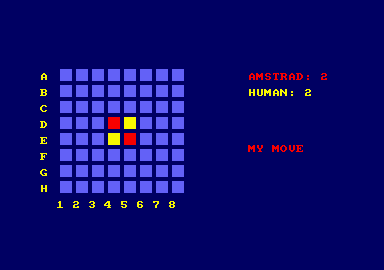 This game, as I'm sure you've realised by now, is the Amstrad's version of Reversi, or Othello. Invented in the late eighteen hundreds, the game is played on an ordinary eight by eight checkerboard. When played on a board, you use pieces which have different colours on each side. The game begins with four pieces placed on the centre squares.

From this point on, you move by placing one of your pieces next to an opponent's piece or pieces, with another of your pieces further on. When that happens, all the opponent pieces ‘reverse' to become your pieces.

Here's how it works. Suppose a line of pieces looked like this:

If you decided to put your piece (the O) at the end of the line like this:

The opponent's pieces would reverse, so the line looked like this:

The ‘reversing' also takes place along vertical and diagonal rows, so many, many pieces may be changed with a single move.

The game continues until every square on the board is filled, or when neither player can move. If you cannot move, you signal this by entering a zero when it is your turn to move. For all other moves, you enter the coordinates of the position into which you wish to move, touching the side number first (you'll see, when you play this, that there are the numbers one to eight down the sides, and across the top and bottom) followed by the number across. There is no need to use the ENTER key when telling the computer the moves you wish to make.

You'll find this program makes very effective use of Amstrad colour, with a large and clearly displayed board. The playing algorithm was developed by Graham Charlton, and the Amstrad adaptation and display is by Tim Hartnell.