Who needs a Plus? Simon Forrester plays a CPC Pang clone from Austria that will blow your mind - it's stunning! 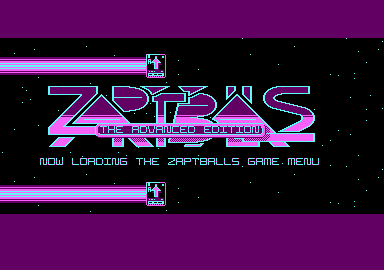 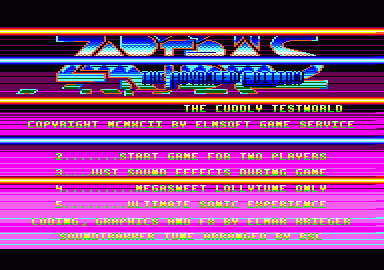 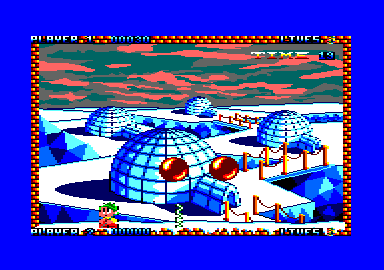 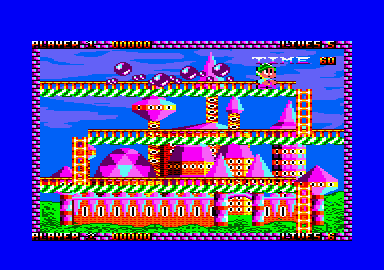 One of the main influences on the CPC these days is the foreign demo scene (see the special feature this issue), with teams such as Logon producing little sideshows that continue to amaze everyone as to just what Arnie (Uzi!) can really do. So, how do these pretty (but essentially pointless) effects work when used in a game?

Well with Zap 't Balls, here's our chance to find out! The game is a Pang clone written by Elmar Krieger, and introduced to Britain by a previously unheard of team headed by ex-CPC Attack! writer Richard Wildey, under the name of Sentinel.

The first thing that hits you is the loading sequence. It's a treat to watch, featuring a scrolling message, a 3D chess board, a stunning logo, and some truly stunning men made up of bubbles (in keeping with the theme) waving their various bits around (er, limbs, that is - ed). The worlds (sections to us uneducated serfs) are selected from this part, which serves as the main game menu, though codes are needed to access all but the first world (And we've got every single code and you can't have them - hardehardehar!).

Once you've picked your jaw off the floor, you can get down to playing the game - and you'll want to! Anyone who's ever fed their week's gob-stopper allowance into a hungry arcade machine to play Pang will not be disappointed with this game, as it's just as fast, frustrating, furious, and flabbergasting (getting desperate for alliteration here!) as its commercial Capcom counterpart.

The game is based around the idea of a blokey with a sort of sproingy gun thing shooting bubbles bouncing overhead, which split, and split, and split, getting smaller each time until finally, they vanish completely - and that means a completed level! Oh, and needless to say, if any one of these bubbles touches you, you're dead...

Why is it that all the really good games are based on a really simple idea? Each level is, of course, more challenging than the last, with platforms, ladders, shootable blocks, snowballs (wait and see!) and other such hazards.

In case you're wondering what happened to all the mind-numbing, spine-tingling, ball-crunching special effects you saw when you first loaded the game, they don't stop at the loader. The options menu (toggling music and such) is a myriad of colour and wavy lines... er,though that does make it a little difficult to actually read.

But with a game as expertly written as this, why is it distributed by a homegrown group instead of a major distributor? As it was written specifically with the CPC in mind (now there's something new!) and by an almost underground author, it has no conversion prospects, and wouldn't be attractive to a major software house.

Some games are just flashy demos with some gameplay tacked on. Some are dull efforts with a jazzy loader. Zap't'Balls is neither. It has both amazing graphics and real gameplay.