This is the first release from Elite since FB's Boxing over six months ago but that lean spell looks set to come to an end with Commando and Roller Coaster following hot on its heels. Those games are likely to make more of an impact, but this exploration game will still find plenty of takers for its pleasant graphics and difficult action.

The Wilf of the Title is an ancient here bearing a pair of wings on his back. He's in search of the pieces of the Dragon Amulet that have been scattered through six time zones He begins in the year one million BC and has to flap his way through to 2001 collecting bits of amulet on the way and avoiding the many dangers set against him.

About 60 screens make up the six time zones with each zone having characteristic scenery and inhabitants of the era in which it is set. One thing that appears in every zone is seagulls obviously a very resilient bird that refused to evolve in one million years into anything but two flapping white lines. 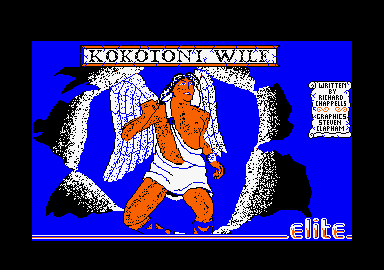 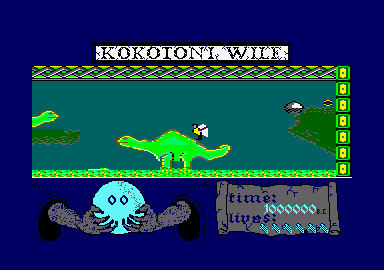 There are plenty of other hazards apart from the gulls with pterodactyls and dinosaurs, soldiers, monks, spaceships, killer plants, helicopters, missile launchers? and the odd shark They all pop up on heme territory and move in regular patterns, shuttling up and down vertical!y and horizontally waiting for winged Wilf to blunder into then) There are some nice designs and reasonable animation and although the screens tend to be "chunky" they are mostly colourful and attractive.

Negotiating the screens is mostly a matter of delicate flap control and good timing with most connections between screens being obvious arid nothing to think about Fifing around picking up objects won't be everybody's cup of tea but the screens can get quite tough particularly with Wilf suffering from gravity symptoms every time you stop flapping.

To get between timet zones Wilf has to collect all the pieces of amulet and then an additional one that appears after the others and transports him to the new zone. Once explored a section can be remembered and easily completed so thai once cracked this won't hold much interest, particularly since there's no score except of the number of pieces collected.

The monotonous noise of wings flapping can soon be disposed of with no music to cheer the ear. However the main problem faced by the game is that it's showing its age in its gameplay. These days arcade adventures are on the scale of Sirangeloop and simple exploration games just aren't in the same league